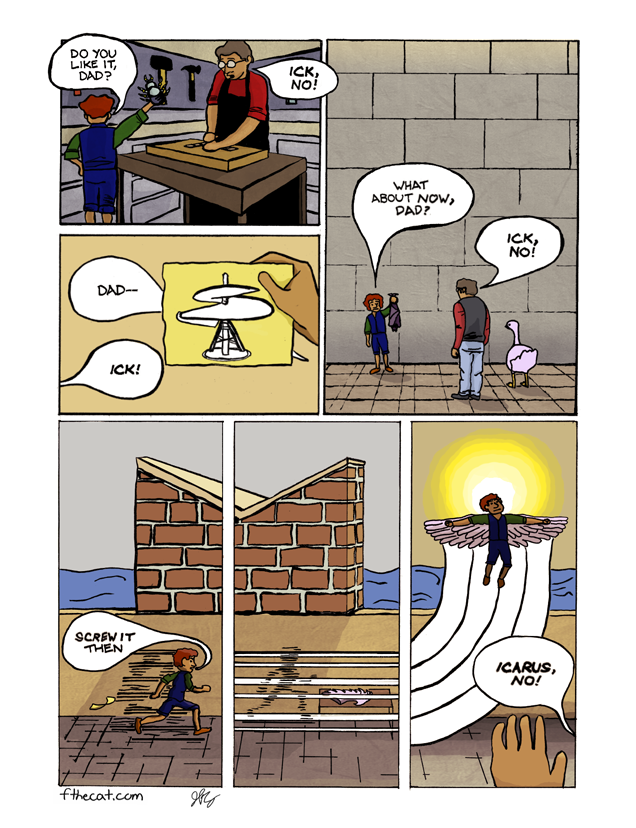 This is a pun based on the myth of Icarus. It explores Icarus’s possible motivations for doing what he did.

If this comic were part of a series, it would be the sequel to this earlier gag comic.

Update: Here is a deeper explanation that I wrote for a curious reader, if you’re interested in having it deconstructed:

For most of the comic, the reader sees a boy showing his father various things with no clear connection, and the father seeming to dismiss each thing with immediate disgust.

At the end, the comic reveals that “Ick” is not an exclamation of disgust, but a nickname for Icarus, the mythical boy who flew too close to the sun. Icarus and the father, Daedalus, are trapped in the Labyrinth and while Daedalus has been preparing to make wings out of a goose’s feathers, Icarus has been showing his father other suggestions about how to build something that would help them escape from the Labyrinth.

The comic offers an alternative perspective about why Icarus flew too close to the sun despite his father’s warnings. The conventional story is that Icarus’s hubris got the best of him; “flying too close to the sun” is now a common metaphor for getting too greedy and trying for too much. In the comic, however, Icarus is actually just frustrated at the constant rejection by his father. While in format this is a gag comic, it’s a gag comic that also offers optional, deeper commentary on a myth, if the reader is tuned into that dimension of the comic.

I made the comic knowing that a large portion of readers would not really recognize all the mythical elements. However, I think a relatively higher number will recognize the idea of Icarus and “flying to close to the sun.” And an even larger number will at least get the idea of “Ick” being short for Icarus despite normally being used as an expression of disgust.